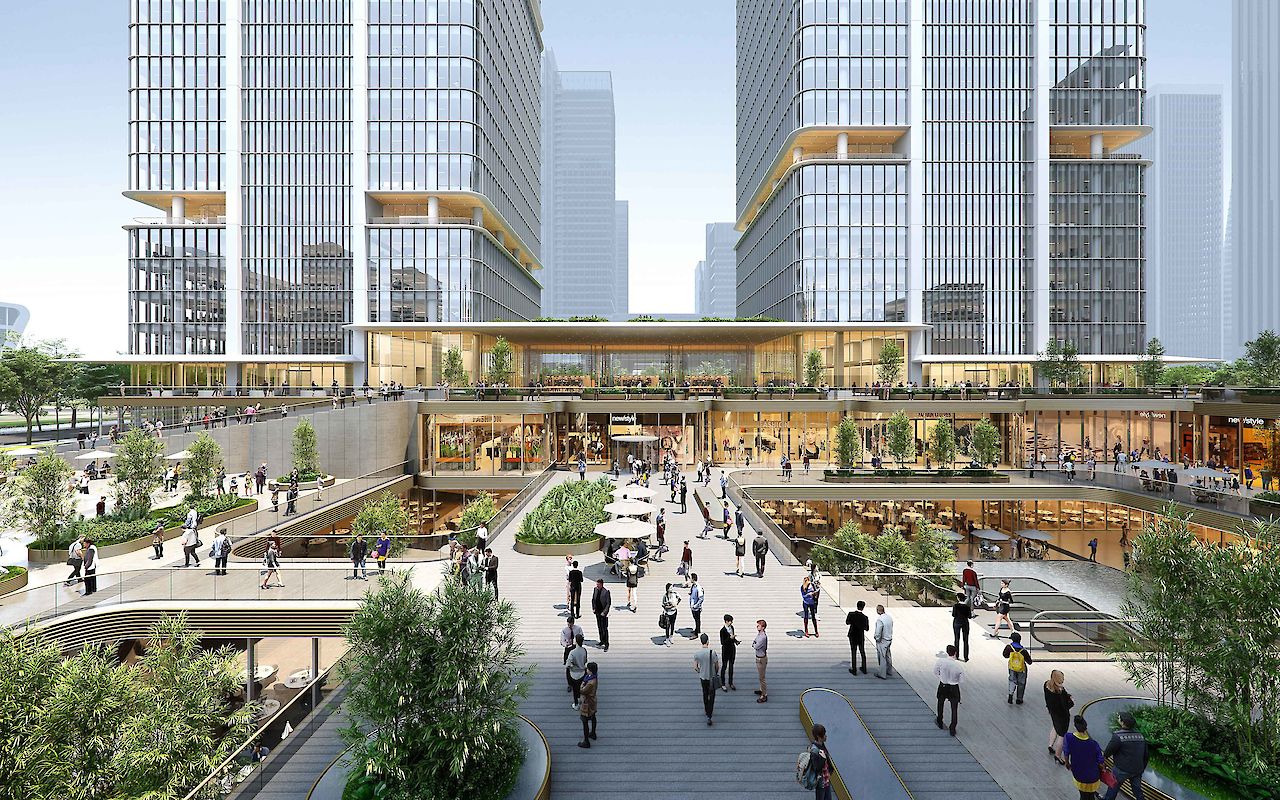 / Mixed Use - Office, Conference and Retail

Superimpose designed a human-centered, accessible and sustainable business, exhibition and trading landmark in Ningbo. The unique design promotes a pedestrian friendly realm coexisting with a smart retail strategy, efficient tower location and smart plan layout. The design - which is called ‘the Ningbo Sails’ referring to Ningbo’s maritime past and present - was awarded second place out of eleven invited high-caliber contestants.

The organization behind the Ningbo International Trading Expo Center aims to create an exhibition and trading landmark for a new eastern district of Ningbo. Together with the old city centre ‘Sanjiangkou’, the new district makes up the ‘Two-Centre One Axis’ concept in the overall city planning of Ningbo.

The site is located along a new ‘Central Park’ on the east, and a canal on the North and will be connected to the Pan Pacific Hotel located on the West of the site. Superimpose’s design recognizes the importance of the site in the new district and applies programmatic strategies to create a well-balanced and interconnected function-mix in between the project site and surrounding sites.

Ningbo is known to be one of China’s most important trading cities and Ningbo–Zhoushan is is among the busiest ports in the world. From ancient times the rivers and sea near Ningbo were filled with typical Chinese sailing boats that once transported goods across the seas. These sailing boats were used as a source of inspiration for the project: The towers are situated as ‘sails’ on an elevated deck of retail whereas the new conference center carries a white screen curved façade reminiscent of the sails of these Chinese sailing boats.

Creating an outstanding public realm which seemlessly intergrates green, work and leisure  was Superimpose’s main goal during the design stage. In order to create a green and vibrant courtyard as the ‘heart’ of the development, whilst simulteaneously maximizing the distance in between all buildings, the towers and conference center are placed at the perifery of the 42,000 square meter site.

In order to further achieve this goal, the on-site road system and office lobby car drop off zones are elevated to the second level of the development, keeping the ground floor nearly free of car circulation. At the same time, this strategy increases valuable retail exposure and accessibility of the ground floor.

Inside the pleasant and well-shaded courtyard, large floor openings open up the development towards basement level one. Together with the first and second floor, this basement level composes what Superimpose calls the ‘three ground floors’. This concept results in a dynamic interplay of levels which blurs the notion of a standard ground floor.

Together, the strategies described above create a strong and sustainable approach to complex and important sites, with a versatile mix of functions. Superimpose will charrish the outcome of this process and polish the strategies further for upcoming projects.

Go to next project: Sky Gallery